"In the Spring of 1932, as America's Great Depression deepened, 20,000 out of work WW1 veterans descended on the nation's capital to demand immediate payment of bonuses. While most marchers set up camp in Anacostia, over 1,000 squatted in abandoned buildings along Pennsylvania Avenue near the Capitol. The site was dubbed "Camp Glassford" after DC Police Chief Glassford, a retired Brigadier General who arranged the use of the buildings (which were in the process of being torn down to make room for the National Gallery of Art and the Federal Trade Commission) and sent bedding and food to the Bonus marchers, many of whom were accompanied by their wives and children. Although the House of Representatives approved payment of the bonus, the Senate voted against it. When Congress adjourned, the Federal government -- led by General Douglas McArthur and Major Dwight D. Eisenhower -- moved aggressively to evict the unarmed veterans, using teargas, tank, cavalry and bayonet-wielding troops to clear Camp Glassford, reducing the area to smoking rubble. Two veterans shot dead by the troops are buried in Arlington National Cemetery. Camp Marks in Anacostia, was similarly attacked and burned (an event that echoes back to the British sacking in 1814 and forward to 1968 when the city once again burned in the aftermath of the assassination of Martin Luther King)."
- New York Magazine (no date; from Bonus VF) 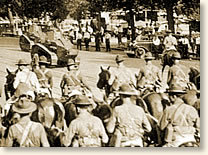