Before Mobile was founded, or New Orleans even a place on a map, Dauphin Island was the center of French colonization in the Southern United States. Explored and mapped by the Spanish as early as 1519, it was 1699 when the French established their permanent colony here. This was the home site of M. de La Mothe de Cadillac, second governor of the Louisiana Territory, who moved to Dauphin Island in 1713. The park is equipped with picnic tables and public restroom facilities. 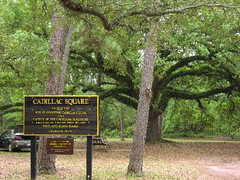