It’s not often you find food synonymous with a city and even rarer that you find three such items all under one roof. Goetta is a staple on breakfast tables. Double decker sandwiches are two tiered sandwiches filled with such things as beef, ham, cheese, bacon or veggies between each toasted slice. Then of course there’s Cincinnati chili. The icon of icons in the Greater Cinci Area is widely regarded as THE best around 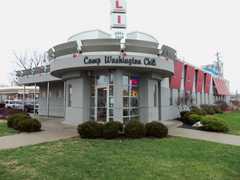