The Extra Mile – Points of Light Volunteer Pathway is honors individuals who championed causes to help others realize a better America.

The Extra Mile medallions, set into the sidewalk, begins at the corner of Pennsylvania Avenue and 15th Street, NW and continues north on 15th Street to G Street, NW. There, at the Old Ebbitt Grill, it turns east on G Street for two blocks to its intersection with 13th Street.


Cesar Chavez
Led by his desire to secure a better quality of life for migrant farm workers, Cesar Chavez helped found the United Farm Workers for America (UFW), the first effective farm workers’ union in the United States. Under his leadership of nonviolent protest, the UFW was able to secure improved wages and benefits, more humane living and working conditions and better job security for some of the poorest workers in America. Through his life of service, Chavez provided inspiration to countless others.

Frederick Douglass
Famed orator and writer Frederick Douglass was also a key architect of the movement that ended slavery, the very institution into which he was born. Even after his goal to abolish slavery was achieved, Douglass persisted in his struggle for equality. His work in the women’s rights and civil rights movements helped set the stage for further landmark change in this country.

Samuel Gompers
As founder and 37-year president of the American Federation of Labor (AFL), Samuel Gompers is credited with winning unprecedented rights and protections for the American worker. Never wavering in his belief that power for the worker lay in collective action and honest negotiation, Gompers experienced unequaled success in organizing millions of laborers into a single national organization. Read more on Samuel Gompers.

Harriet Tubman
Harriet Tubman escaped a life of slavery only to return south, at her own peril, time and again, to lead more than 300 fugitive slaves through the Underground Railroad to safety and freedom. After the Civil War, Tubman raised money to clothe and educate newly freed African-American children and established a home for and indigent African-Americans.

Helen Keller Memorial Plaque
Like the statue of her found in the US Capitol (see picture) the “Helen Keller story” that is stamped in our collective consciousness freezes her in childhood. We remember her most vividly at age seven when her teacher, Annie Sullivan, connected her to language through a magical moment at the water pump. We learned little of her life beyond her teen years, except that she worked on behalf of the handicapped, as mentioned in this commemorative plaque.
But there is much more to Helen Keller’s history than a brilliant deaf and blind woman who surmounted incredible obstacles. Helen Keller worked throughout her long life to achieve social change; she was an integral part of many important social movements in the 20th century. She was a socialist and a radical who believed she was able to overcome many of the difficulties in her life because of her class privilege—a privilege not shared by most of her blind or deaf contemporaries. “I owed my success partly to the advantages of my birth and environment,” she said. “I have learned that the power to rise is not within the reach of everyone.”
Consider her in her own words, during a 1916 interview in the New York Tribune:
I was religious to start with. I had thought blindness a misfortune.
Then I was appointed on a commission to investigate the conditions of the blind. For the first time I, who had thought blindness a misfortune beyond human control, found that too much of it was traceable to wrong industrial conditions, often caused by the selfishness and greed of employers. And the social evil contributed its share. I found that pov-erty drove women to a life of shame that ended in blindness.
Then I read HG Wells’ Old Worlds for New, summaries of Karl Marx’s philosophy and his manifestoes. It seemed as if I had been asleep and waked to a new world—a world different from the world I had lived in.
For a time I was depressed, but little by little my confidence came back and I realized that the wonder is not that conditions are so bad, but that society has advanced so far in spite of them. And now I am in the fight to change things. I may be a dreamer, but dreamers are necessary to make facts!
She was even a long-time member of the much maligned (and still active) Industrial Workers of the World. In the same interview, she stated: “The true task is to unite and organize all workers on an economic basis, and it is the workers themselves who must secure freedom for themselves, who must grow strong.” Miss Keller continued. “Nothing can be gained by political action. That is why I became an IWW.”
- Fhar Miess 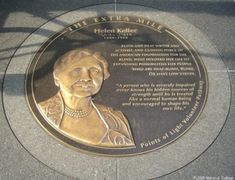