At this location Coxey's Army camped April 29-31, 1894 on the grounds of what was then Brightwood Riding Park. They had marched 400 miles on foot from Ohio in 35 days, on their way to protest the effects of a severe economic depression. As Coxey declaimed, "Congress takes two years to vote on anything if left to itself. Twenty-millions of people are hungry and cannot wait two years to eat." 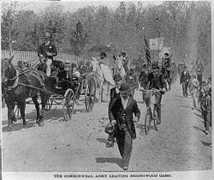