This site includes two statues flanking the Federal Trade Commission building, as well as four bas reliefs: two on the Pennsylvania Avenue side and two on the Constitution Avenue side.
"Man Controlling Trade" statues: these works by Michael Lantz speak to the power workers have when united in a common goal. Not only are workers responsible for creating the goods to enable trade and spur economic growth, but they also have the power to bring the economy to a stand-still by withholding their labor. The two statues, although similar, are not identical. In "the Pennsylvania Avenue version, the horse has a sinister look. It appears to be biting the man, and the man’s weak positioning suggests that he will fail to bridle the menace. In the other, on Constitution Avenue, the man appears sinister, and he has a more powerful hold upon a more elegant and sympathetic animal. Perhaps Lantz’s statuary captures our ambivalence about the regulation of trade."
"Americans at Work, Past & Present" is comprised of 4 bas reliefs over the doorways of the FTC: four artists collaborated to create the elements of Americans at Work, Past and Present: "Industry," by Chaim Gross, "Shipping," by Robert Laurent, "Agriculture," by Concetta Scarabaglione and "Foreign Trade" by Carl Schmitz. As part of the WPA, these bas-relief were created in 1937. 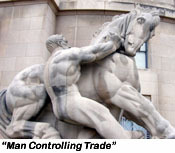