Florence and Normandie - Start of the LA Riots

After the white officers that beat Rodney King were found not guilty, rioting began on Florence and Normandie. The most infamous scene of the riots took place here when Damian Williams helped to drag Reginald Denny, a white truck driver out of his truck and threw a concrete rock at his head. Denny survived and Williams was later arrested. 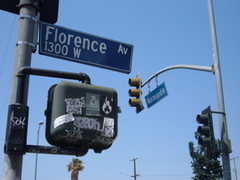