On May 4, 1886, about 2,500 people gathered in Haymarket Square near Randolph and Desplaines to hear labor and community leaders such as August Spies, Albert Parsons, and Samuel Fielden discuss the violent clash betweeen striking workers and the police the day before at the McCormick Reaper Plant, the movement for the eight hour day, and general tensions between labor and capital across the nation (see accompanying photo of the Square in 1911 -- Chicago History Museum, DN-0057584). At about 10:30, with the crowd reduced to approximately two hundred, a bomb exploded at the same time that 176 armed police officers moved in to disperse the gathering. In the hue and cry for "law and order" eight men -- the "Haymarket Eight" -- were brought to trial and convicted for the bombing. One of the eight, Louis Lingg, was found dead in his cell on November 10, 1887. The next day, four others were hanged. In June 1893, Governor Peter Altgeld pardoned the three surviving men convicted in what Altgeld described as a profoundly unfair trial.

The speakers during the May 4 gathering spoke from the back of a wagon that was parked on the spot where sculptor Mary Brogger's "Haymarket Memorial" (2004 -- see attached photo) now stands. According to historian William J. Adelman, the bomb was most likely thrown from the vestibule of a building on the Northeast corner of Randolph and Desplaines. Just to the north was Zepf's Hall (now 630 West Lake Street), then home to the Lumbershovers' Union that had asked Albert Spies to speak to its members near the McCormic Plant on May 3. When the bomb exploded, Albert and Lucy Parsons were in the tavern on the first floor of Zepf's Hall with their children and their friend Lizzie Holmes. 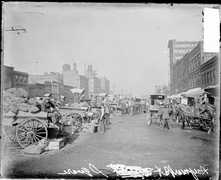