(NOTE: grave is on Linden Avenue, just south of the Masonic Circle, Site 178 in Section F, Lot B) Henry Miller was a local lineman working at the 1890 St. Louis Exposition, featuring "a glorious display of electrical wonders." But as he spoke informally to his fellow tradesman, they found industry wide problems and concluded that in addition to exceptionally high mortality rates, they could earn no more than fifteen-to-twenty cents an hour for 12-hour days. Wiremen fared no better. Seeking to act collectively, they turned to the American Federation of Labor and chartered themselves as the Electrical Wiremen and Linemen's Union, No. 5221 of the AFL. Miller was elected president. Recognizing immediately the organization had to be national to command any real bargaining power, he traveled the country spreading the word about the benefits of unionization. Everywhere he went, he organized the electrical workers he worked with into local unions. Among the locals chartered in those early years were in Chicago, Milwaukee, Indianapolis, New Orleans, Toledo, Pittsburgh, New York and other cities. On November 21, 1891, the first convention was called in St. Louis with 10 delegates representing 286 members. Meeting in a small room above Stolley's Dance Hall in a poor section of St. Louis, they drafted a constitution, laws and emblem -- a fist grasping lightning bolts. The National Brotherhood of Electrical Workers was born. Miller died on July 10, 1896, when an electric shock caused him to fall from a pole in Northeast Washington, DC. Click here http://www.ibew.org/articles/01daily/0107/010711.htm for a longer version of this bio on the IBEW website. 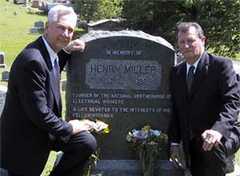