The little publicized election of March 6, 1855 ushered in a new mayor named Levi Boone and his coalition of nativists, Know-Nothings, anti-Catholics, and temperance advocates to city government. Boone drew the ire of Chicago’s Irish and German community when he increased liquor licensing fees from $50 to $300. His “law and order” platform also included the tripling of the Chicago police force- without hiring any immigrants. When Boone ordered the enforcement of an ordinance that called for all taverns to be closed on Sunday, it was seen by many as a direct attack on the Irish and German community, who traditionally made alcohol part of their Sabbath-day leisure activities.

Boone made hundreds of arrests for violation of the Sunday temperance ordinance and soon the courts were clogged with cases. Judge Henry Rucker was given the job of presiding over a test case for the ordinance enforcement on April 21. Crowds gathered in front of the original Cook County Courthouse at Clark and Randolph to protest the ordinance. The police dispersed the crowd after arresting nine people. Later in the afternoon, protesters assembled again on Clark Street, north of the river, and began to march toward the courthouse. Mayor Boone ordered the Clark Street Bridge to be raised, thus halting most of the crowd until the police and local militia could arrive. When the bridge was lowered, a riot broke out that was quickly put down. One person was killed in the melee and 60 were arrested in what was later dubbed the “Lager Beer Riot of 1855.”

Boone later eased his enforcement of the Sunday closing laws and in March of 1856, he and his slate of candidates were voted out of office. The $50 licensing fee was restored and Chicago’s Irish and German communities remained politically active. 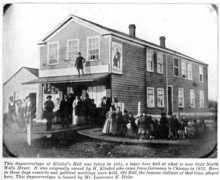