Part of the Marcy-Newberry Association, North Lawndale's Marcy Center grew out of the response to the Jewish population's move west from the Near West Side. Originally founded in 1883 by Elizabeth Smith Marcy, the group purchased a small building at 300 West Maxwell Street. In 1930, the group broke ground on the North Lawndale building. From the beginning, the Marcy Center has provided job training, youth recreation programs, daycare, and adult education. As African Americans moved into the area from other parts of the city and southern states, the Marcy Center remained committed to the community. In 1951, the center recruited Hazzard Parks of Exmore, Virginia, who had been working in New Orleans, to come to the Marcy center. Parks became the head of the Center, and a leading figure in the North Lawndale community groups and public anti-poverty programs. 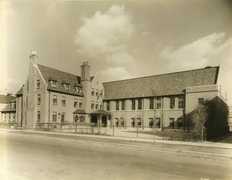