Chicago Church Tour 3/3:
The role of black churches in the Civil Rights Movement was crucial. Black churches were economically connected to their black communities through tithes and association. This situation created a level of black autonomy, where other black organizations were clandestinely controlled or hindered by links to white society. Consequently black churches flourished and evolved into not only a place of worship but as a center for political activism. Civil rights leaders, ministers, and union organizations utilized this platform with remarkable results within their black communities.

The Metropolitan Community Church on 41st and South Park Way (Dr. Martin Luther King Jr. Drive) was such a platform. A. Phillip Randolph, the president of the Brotherhood of Sleeping Car Porters, held meetings and gave numerous speeches there. For example, on July 1, 1943 A. Phillip Randolph presided over a meeting of 500 delegates of the March on Washington Movement at this church. This movement was established to address the concerns of segregation and discrimination within the United States government. Other Civil Rights leaders who spoke that day were Dr. Lawrence M. Ervin, an eastern director of the March on Washington Movement and Lawrence D. Reddick, the curator of the Schomburg collection of Negro literature in New York City. In addition, on March 18, 1945, A. Phillip Randolph presided over a rally sponsored by the Chicago citizens fair employment practice committee, and on March 14, 1943, Congressman William A. Rowan before the Chicago Citizens Committee of one thousand people assured that a newly introduced civil rights bill was legitimate; both of these events were held at the Metorpolitan Community Church.

To begin this tour see Woodlawn A.M.E. on 65th and Evans Avenue. 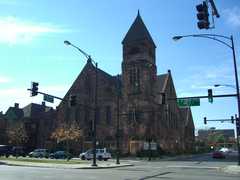