Address:
2501 Powder Mill Rd
in front of the Hillandale Baptist Church, near the intersection with Riggs Rd
Silver Spring, MD 20903, US

Irish-born Mother Jones was one of the most well-known women of the 20th century. She was called "the Joan of Arc of the Labor Movement," "the Miners' Angel," "the Most Dangerous Woman in America" and, in her later years, the "Grand Old Champion of Labor." Throughout her long life she spread the gospel of unionism, organizing workers throughout the country, often sleeping in union halls or on the floor of a coal miner's home. She once told a congressional committee, "my address is like my shoes, it travels with me. I abide where there is fight against slavery. In her later years, from 1928-1930, she stayed at the home of Walter and Lillian Burgess who lived on a small truck farm at the site of what is now the Hillandale Baptist Church in Adelphi, Maryland. The Burgesses loved Mother Jones. Lillian befriended her and became her caregiver during the last years of her life."
(Saul Schniderman; see whole posting at http://www.cwluherstory.org/mother-jones-in-2008.html) 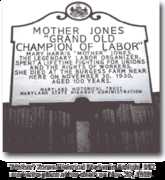