Gravesite of Knights of Labor Grand Master Workman Terence V. Powderly (see also Powderly, Terence V, Home). Powderly (1849-1924), led the Knights Of Labor from 1878 to 1892. A machinist and Greenback-Labor Party Mayor Of Scranton, PA, Powderly conducted the KOL's transition from a secretive coal miner's union in the 1870s to an inclusive national labor organization. Rivalry between the powerful KOL and the emerging American Federation of Labor (AFL) in the 1880s, disagreement over reform vs. bread-and-butter emphasis, and personal differences with both the other KOL officers and AFL leaders -- especially Samuel Gompers (see cite) -- characterized Powderly's tenure. After retiring as Grand Master Workman in 1892, Powderly was appointed Assistant Commissioner of Immigration (?) and moved to DC (see Terence V. Powderly Home). His voluminous papers are in Catholic University's archives. (Jon Garlock)
DIRECTIONS: You can get a map from the parish office (the main building on the left when you come in off Allison Street). The grave is in Section I; follow the main road to that section; when it curves to the left, a path goes off to the right, and Powderly's grave is about a hundred feet down on the left, just off the path. NOTE: this icon is actually right on the graveside 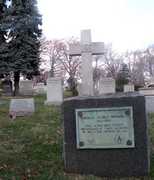 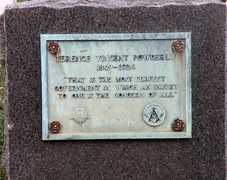 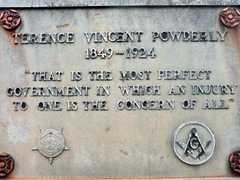 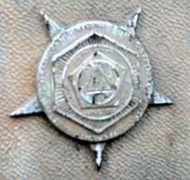 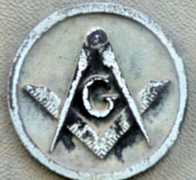