Among the Washington National Cathedral’s 231 stained glass windows are three honoring men who spent their lives “pursuing the rights of workers”: Samuel Gompers, William Green and Philip Murray (cite other DC sites for each). The windows (see below for locations) are spectacular and tangible evidence of labor’s place in Washington, with work and workers portrayed both explicitly and allegorically, as well as union emblems from both the AFL and the CIO (which had not yet merged). Take binoculars or a camera with a good zoom lens (photos are permitted) to get the best view of the windows’ many details. (Chris Garlock)

The descriptions below are from “Jewels of Light,” by Elody R. Crimi and Diane Ney, with photographs by Ken Cobb, and available in the Cathedral Gift Shop.

“Agriculture and Maritime” (1959; in the Nave, North Main Arcade, Bay 6, White Bay; artist & fabricator Joseph G. Reynolds, Jr.) “recognizes those members of the agriculture and maritime ‘guilds’ who ply their trades in the soil and on the sea, providing the basic nourishments of life. William Green…spent his early life in the coal mines and his later life organizing the American Federation of Labor…his life’s work was to create a society in which every human being was recognized for the value of his or her work…the theme of this window is the sacramental nature of work through the production of food, basic to life.”

“Industrial and Social Reform” (1959, Nave, North Main Arcade, Bay 7, Boardman Bay; artist & fabricator: Napolean Setti): “Philip Murray…championed the well-being of families as a means of promoting the well-being of nations. Both result from a fair wage for a fair day’s labor, and this is played out in the window’s theme, which is the necessity for justice for laborers, as illustrated through a series of biblical and modern scenarios.” 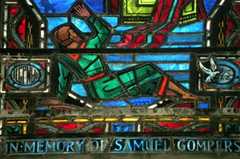 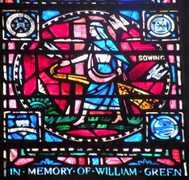 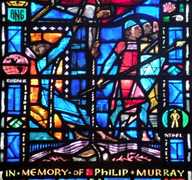