Temporal Terminus: Marking the Line is a temporary public art exhibit that celebrates the important transformation of the Prairie Line Trail from rail to linear park.

In 1873, the Northern Pacific Railroad fulfilled Abraham Lincoln’s dream that the transcontinental railroad reach saltwater. This historic achievement occurred right here in Tacoma where water would have first been spotted by railroad workers at about 17th and Pacific Avenue. Trains were still running on the tracks through the University of Washington campus and downtown Tacoma up until 2003.

Now the historic line is undergoing a new transformation. The proposed $5.83 million walking, biking and interpretive trail follows the historic rail corridor linking the University of Washington-Tacoma campus, the Brewery District, the Museum District, Thea Foss Waterway and eventually will connect with the Water Ditch Trail and South Tacoma.

The City of Tacoma received a grant from the National Endowment for the Arts to create a public art plan for the Prairie Line Trail and selected Todd Bressi and the team Thoughtbarn (Lucy Begg & Robert Gay) to create the plan and a demonstration project that will begin to bring attention to the project and the potential for its use. In partnership with the University of Washington-Tacoma, this exhibit is the first intervention to be explored along the Prairie Line Trail.

Thoughtbarn created one artwork and seven more sites were identified for Tacoma artists. Seven teams of artists who are participating in Tacoma’s public art training program have created site responsive works as well.
(view on the map)
Dock Street: Zero Down 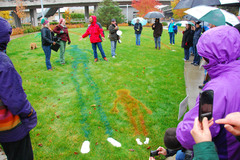 From a series of ‘footprints’ that occupy the grassy area, colorful shadows extend. The images are rendered in temporary paint and continued in chalk, the forms span the grass and onto the concrete morphing into forms human and imagined. Each brightly colored shadow represents the diversity and complexities of humans’ personalities. Artists: Chris Jordan, Chandler O’Leary, Claudia Riedener
(view on the map)
15th Street Overpass: TACOMABALL

The curve of this overpass is the inspiration for TacomaBall! a monumental, temporarily interactive pinball style game will come to life during the Prairie Line Trail tour. Balls will be bowled down the curve interacting with various obstacles depicting various national and local icons. Racing stripes and imagery reminiscent of the game will remain on the ramp through the course of the exhibit making every pedestrian a player in the game. Artists: Kyle Dillehay, Lisa Kinoshita
(view on the map)
Hood Street: Rogue Rhizomes 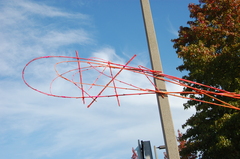 This section of the Prairie Line Trail is a ragged remnant of an industrial heritage that has witnessed dynamic transformation all around, while remaining itself, virtually unchanged ov er the last 100 years. The fringes of this space are a competition between structured plantings and wildness trying to reinsert itself into the landscape. This installation explores the rogue elements of organic invasiveness, between city and wildness. Using brightly colored markers and a three-dimensional letterform the eye is drawn from a distance and evoke ideas of giant flora. Organic patterns around the base of each light pole emanate outwards over time making use of positive and negative space and ‘invade’ the surrounding area. Artists: Chris Sharp, Lance Kagey, James Sinding
(view on the map)
Tollefson: Link

“Link” makes visible the connection between the rail lines and highlights how the Prairie Line Trail linked Tacoma to the communities of Tenino, McIntosh, Wetico, Rainier, Yelm, Roy, Hillhurst, Lakeview, and South Tacoma. Floating yellow orbs, iconic of the yellow and black railroad signs will re-enact the stops along the line that connected with these communities. Artists: Bret Lyon, Janet Marcavage, Holly Senn
(view on the map)
UW-T Campus: Ghost Prairie 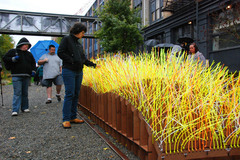 Thoughtbarn installation speaks to the railroad line’s namesake. Inspired by the mysterious Mima mounds located south and the plight of the prairie, our public art installation introduces a piece of ‘artificial prairie’ along the rails of the Prairie Line Trail in downtown Tacoma. It is a playful referral to both the railroad’s history and its new landscape-driven future as a bike and pedestrian path through the city. For its duration the colorful, intriguing object(s) will catch the eye of local pedestrians and drivers. They will draw attention to the oft-overlooked railroad which nonetheless defines Tacoma’s history. Those most curious can get up close to run their hands along the ‘grasses’, which will also glow at night. Artists: Thoughtbarn (Lucy Begg, Robert Gay)
(view on the map)
UW-T Pedestrian Bridge: Envision

Gigantic eyes look down on the campus from the pedestrian bridge. Are they benevolent? Visionary? Judging? That depends. The eyes are those of Abraham Lincoln, the visionary whose dream it was to complete a transcontinental rail that would meet the Pacific. Is he overlooking his accomplishment or wondering about this particular routes demise and our crazy modern lives? Walking over the ped bridge, one experiences a different viewpoint and inspiration for the endurance of vision. Artists: Jeremy Gregory, Diane Hansen, Ed Kroupa
(view on the map)
UW-T Grassy Areas: Manifest Destiny 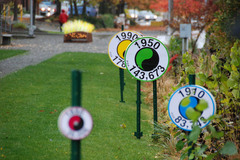 Manifest Destiny was a phrase that justified the territorial expansion of the United States as if it were a divine sanction. A series of markers reminiscent of the Northern Pacific Railroad signs act as a historical timeline of Tacoma, starting in 1870, three years before Tacoma was designated as the western terminus for the transcontinental railroad. A stepping stone begins the journey and the subsequent signs track the growing population of the city over 140 years at intervals that represent the largest jumps in population. Artists: Maria Meneses, Nicholas Nyland, Elise Richman
(view on the map)
Under I-705: Wild Wilderness

This work comments on the diminishing open spaces in our world and that impact on animal habitat. In addition, it calls attention to the wild spaces that exist within our urban midst. A variety of animals that would be hard pressed to co-exist inhabit this newly created environment. Artists: Jennifer Adams, Kristin Giordano, Kenji Stoll