12 rue Jean Goujon
Paris, 75008
33 (0) 1 44 95 16 16
The Hotel San Régis in Paris enjoys both an impressive address and a great location near the Champs-Elysées and Faubourg St Honoré, just one block from the Avenue Montaigne. As one of the most fashionable neighborhoods of Paris the Golden Triangle concentrates prestigious Haute Couture boutiques, theatres, gastronomic restaurants and all kinds of nightlife attractions. All at easy walking distance from the San Régis.

Discreet luxury, refinement and warmth, the San Régis offers the exquisite setting of the Parisian private residence that it used to be. Each of the 33 bedrooms and 11 suites is designed with its own character, fine fabrics matching with period furniture and objets d’art. Colors vary from a room to another, from bright yellows to deep reds, or from soft blues to flowery patterns, making each room a unique experience.

The "Boiseries" and "Winter Garden" Lounges, with the English Bar are privileged places for either a confidential meeting, an afternoon tea with friends or for a cocktail before the show. It’s an ideal hideaway kept secret from the roaring crowd of the Champs-Elysées.
Loyal to the sense of discretion which makes the San Régis so unique, the restaurant is decorated in the style of a library with extensive oak panelling, recreating the refined atmosphere of a private dining room.
(view on the map)
Grand Palais 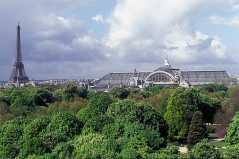 3, avenue du Général-Eisenhower
Paris, 75008
After a complete renovation of its huge stained glass roof, the Grand Palais reopened in 2006.
Originaly built for the 1900 Paris World's Fair, it is now France's most important hall for international art exhibitions and fairs.
It hosts for example the FIAC (International Fair for Contemporary art) in October, and the Biennale des Antiquaires in September.
(view on the map)
Petit Palais

Paris, 75008
The Petit Palais hosts the Museum of Fine Art. The renovation that has been carried out for four years revealed the beautiful facade of this little palace built for the 1900 Paris World's Fair.
The museum collections cover a very wide range of domain (paintings , drawings, sculptures, tapestries...) and art periods (greek, egyptian, Renaissance... until 19th century).
(view on the map)
Jardin des Tuileries
Paris, 75008
The Tuileries Garden offers a very pleasant walk from Place de la Concorde to the Louvre.
The perspective of the oldest and largest park of Paris was created by Lenotre (the designer of Versailles gardens).
Walk around to discover the sculptures by Rodin, Max Ernst, Giacometti and many others, or just sit on a chair near the central pond and watch the children playing with their colorful sailboats.
(view on the map)
Louvre 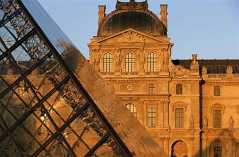 Paris, 75008
Open to the public since 1793, the Louvre is one of the most important museum in the world. It houses major works of art of all times, Da Vinci's Mona Lisa being the most famous among them.
(view on the map)
Musée d'Orsay 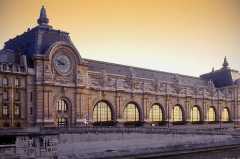 Paris, 75008
The Musée d'Orsay opened to the public in 1986 in what used to be a train station. It focuses on "the artistic creation of the western world from 1848 to 1914."
Paintings by Monet, Delacroix, Degas, Renoir, Ingres, Manet, Van Gogh, Gauguin, and many others, as well as a rich collection of sculptures and photography, make the Musée d'Orsay the second most important museum in Paris after the Louvre.
(view on the map)
Avenue Montaigne
Paris, 75008
Chanel, Christian Dior, Gucci, Celine... You will find them all on Avenue Montaigne.
(view on the map)
Champs Elysées 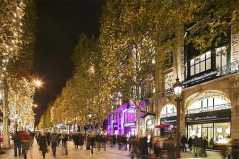 Paris, 75008
This roundabout divides the Champs Elysées in two parts.
On the busy West half, you can find shops, cafés and cinemas up until the Arc de Triomphe.
On the East side, peaceful gardens and fine restaurants, until the Place de la Concorde.
(view on the map)
Musée de l'Orangerie
Paris, 75008
Closed for renovation since 2000, the Orangerie reopened in May 2006.
Inaugurated in 1927, the museum famously houses the celebrated Nymphéas (Water Lilies), now the centrepiece of the site’s collection once more and displayed “in natural light” as per the wishes of their equally famous creator, Claude Monet.
A new subterranean gallery under the Orangerie gardens hosts the Jean Walter and Paul Guillaume collection (Cézanne, Renoir, Picasso, Matisse...)
(view on the map)
Galerie du Jeu de Paume
Paris, 75008
Once a sport court ("Jeu de Paume" is a 18th century tennis-like game), the Galerie du Jeu de Paume is now a museum dedicated to modern photography and video.
(view on the map)
Tour Eiffel 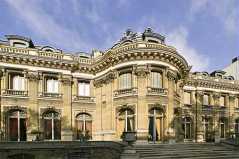 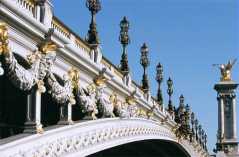 The Bridge Alexandre III is considered the most elegant bridge of Paris due to the numerous sculptures that decorate it. Inaugurated at the 1900 Paris World's Fair, it was the first bridge with a single arch over the Seine, a technical challenge at that time.
While crossing this bridge to the Left Bank, you can admire the beautiful perspective of the Invalides and its golden dome
(view on the map)
Hôtel des Invalides - Musée de l'Armée 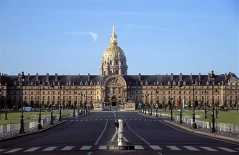 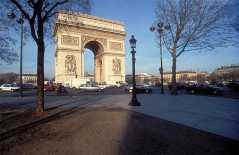 The Arc de Triomphe is one of the most famous monument in Paris. It was built between 1806 and 1836 on the orders of Napoleon I as a monument dedicated to the Imperial Army.
The top of the Arche offers an outstanding view on Paris and on the axis that goes from the modern Arche of La Défense (business district) down to the Louvre through the Champs Elysées.
(view on the map)
Place de la Concorde 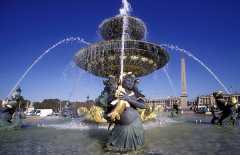 The Place de la Concorde was built between 1755 and 1775. Renamed Place de la Révolution during the French Revolution, here is where Louis XVI and Marie-Antoinette were executed.
Nowadays it is one of the most elegant square in Paris, with its fountains and the majestic obelisk from Egypt.
(view on the map)
Ladurée
75 avenue des Champs Elysées
Paris, 75008
01 40 75 08 75
Renowned for its pastries and especially for its famous Macarons, Ladurée is also a nice restaurant and tea room.
(view on the map)
Palais de l'Elysée 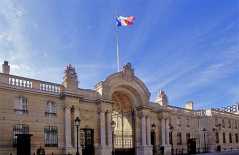 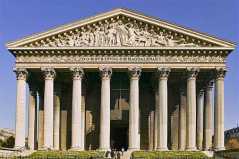 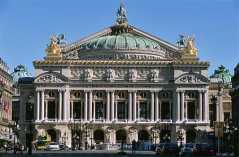 Place de l'Opéra
Paris, 75009
Built between 1862 and 1874 buy the architect Charles Garnier, the Opera is the most impressive exemple of Napoleon III style.
(view on the map)
Place Vendôme