Bidadari Cemetery (Chinese: 比达达利坟场, Malay: Perkuburan Bidadari) is a defunct cemetery in Singapore. There were two sections: the Muslim section was at the base of Mount Vernon, bounded by Upper Aljunied Road, Upper Serangoon Road, and Bartley Road; the Christian section was across Upper Aljunied Road from the Muslim section, and bounded by Upper Serangoon Road as well.


The cemetery was a burial site of Augustine Podmore Williams, an English sailor, on whose life writer Joseph Conrad based his novel Lord Jim. Lim Boon Keng (1869 – 1957), the famed Chinese philanthropist was also buried here. Others include Fr Edward Becheras and the soldiers who were killed during the Sepoy Mutiny in 1917.

Bidadari is believed to be derived from the Sanskrit widyadari meaning "nymph of Indra's heaven" or houri, a similar meaning in Persian mythology. One of Johore Sultan Abubakar's wives had set up her Istana residence on Bidadari Estate. When she left the place, the government bought the 45-acre land and a cemetery was opened in 1904, which became Bidadari Cemetery.

The first to be buried at Bidadari Cemetery was George Mildmay Dare, a member of the local European community.

At the entrance of the Christian-Catholic section, D. M. Craik built a simple well-designed chapel with simple brickwork and exposed roof members, and which became a landmark at the location.

Later, it was leased to the Japanese who built moats with typical Japanese wooden bridges and tea houses.

The cemetery closed for burials in 1972 and cremations conducted at Mount Vernon.

By November 2001, the cemetery was cleared to make way for a new MRT Station and upcoming housing estate.

Today, the site remains vacant, awaiting development. The gates were relocated to Mt Vernon but the chapel demolished. 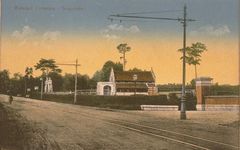 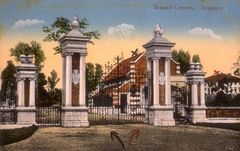 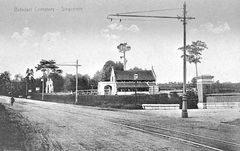