In the 1970s Billy Bisland ran a local bike shop and noticed the talent of a Glaswegian cyclist called Robert Millar. Millar went on to be the most successful Grand Tour rider to date. He came cruelly close to winning the Tour of Spain and also finished on the podium of the Tour de Italy. He remains the only British rider to have been crowned King of the Mountains in the Tour de France and so win the prestigious polka dot jersey that goes with this title.
In recognition of the part that Billy Bisland played in his development, Robert Millar presented the bike shop with a polka dot jersey that he raced in the final stages of the 1984 Tour de France. The jersey remains on display behind the counter in this unassuming shop. 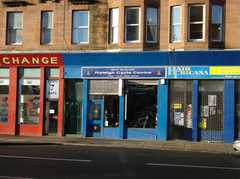