Between Delaware and Walton on Dearborn Street, across from the Newberry Library, Washington Square Park was Chicago's most famous free speech forum used by, among others, the Industrial Workers of the World, the Haymarket protesters, Clarence Darrow. During the Lager Beer Riot of April 21, 1855, angry Germans gathered here to protest a $300 increase in annual liquor license fees. The Germans ultimately won and their beer gardens remained central neighborhood institutions until the 1920s. 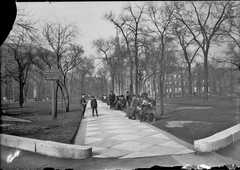