An annual ceremony:
"The (Vancouver) Downtown Eastside Smudge ceremony came to be through a vision and has been carried out by a very dedicated group of women. The Aboriginal Women's Working Group is made up of traditional ceremonial women and men that work within organisations in the helping field. Over the past two times the smudge was carried out WAVAW took the lead to help with the organising of the ceremony, the working group has many partners and this year we are proud to say that the Pacific
Association of First Nations Women is taking the lead with the
organising. These women are taking leadership with the help of our men to bring this ceremony to the people to pray for the healing of the world and to bring an end to violence against women beginning with mother earth.

"Each direction will have a youth to lead the way bearing the sacred flag, a traditional firekeeper bearing medicines to cleanse the sacred mother earth, one ceremonial man and women of each of the sacred races in the east yellow, the south black, in the west red, and north white. Also in each direction there will be four aboriginal ceremonial women and four aboriginal ceremonial men. These people are all known to the
people as our helpers and healers. The drummers are also in ceremony
and a sundance drum is used. The traditional people of these
territories have given permission to do this work and all protocol of ceremony is followed for the entire ceremony from the first offering of tobacco to the closing." 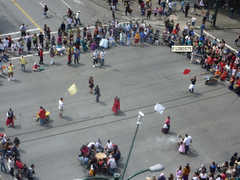 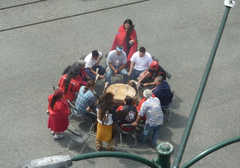