In 1913, the Society of African Missions (SMA) Fathers who had built and dedicated Immaculate Conception Church and School at the corner of Laney Walker Boulevard and 11th Street, asked the Sisters to bring their boarding school students and initiate a new, larger teaching mission. From this early beginning until 1967, Immaculate Conception remained an integral part of Augusta’s African-American community. The superior education it provided for both Catholics and non-Catholics produced generations of informed Catholics as well as many converts to the church. The Franciscan Sisters staffed the school throughout this period. In 1967, the Diocese of Savannah made the decision to close Immaculate Conception High School, but to continue to operate Immaculate Conception Grammar School. 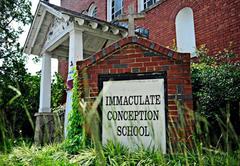