Mr. Lam also worked to help Chinese people become American citizens and was given an award from the Daughters of the American Revolution for his efforts in 1972 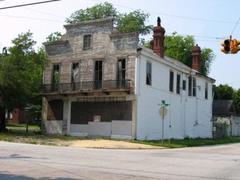