Frog Island, the well-defined African-American neighborhood on Waukegan’s west side, had two origins. First, during the Great Migration, many Southern blacks came to the city, fleeing racial oppression and looking for work. Second, whites in Waukegan responded to this growing presence of African-Americans by defining, through violence, if necessary, certain jobs, public spaces, and neighborhoods as belonging to them.

The Wilder Tanning Company took the lead, in 1917, in recruiting African-Americans for its newly built factory on the city’s north lakefront. Because, however, whites would not rent to blacks, Wilder was “compelled,” in the words of the Waukegan Daily Sun, to purchase land, build houses, and sell them to African-Americans. It did so in a sparsely settled and swampy area of the city originally called “Bull Frog Island.” On the neighborhood’s edge, Wilder put up a rooming house for single African-American men.

There apparently were just two places in Waukegan in which African-Americans could live in the 1920s: Market Street and Frog Island. Market Street was a run-down, dirty residential area, bounded by numerous railroad tracks, on the flats, where many of the newly arrived often settled before moving up the hill. By the 1910s, an integrated and vice-ridden community, on which the police focused considerable attention, Market Street was where few settled if they had much choice. Frog Island, therefore, attracted larger and larger numbers of African-Americans. An integrated community in 1920, by 1930, it was overwhelmingly African-American.

White racism intensified in reaction to the growing numbers – from 351 to 1,017 during the 1920s – of African-Americans in Waukegan. It sometimes took the form of arson as when two houses were burnt the same night in 1921: The first one was newly built and located outside of Market Street and Frog Island. The second was at the extreme western edge of Frog Island. African-Americans were rumored to be purchasing the former, while the latter seems to have been destroyed to help establish the western racial boundary line of Frog Island.

The KKK was the second kind of white response. In 1924, fellow-Klansmen, in full regalia, buried Herbert Gillis, a city police officer. On his casket, according to a newspaper report, “was a fiery cross on which the initials ‘K.K.K.’ appeared.” Four months later, hooded men proudly stood in front of a house they had built for Gillis’ widow. The newspaper’s front-page picture was captioned “Klan Aid Local Widow.” Two years later, the Waukegan KKK hosted a regional Klan rally on the edge of town. It cancelled its proposed march throughout the city when the city council’s parade permit prohibited the wearing of masks.

African-Americans, within this framework of continuing reminders that they had not completely escaped the KKK and white racism, went about building, out of hope, religious faith, and racial solidarity, a life for themselves in Frog Island. They primarily worked at Griess-Pfleger, Wilder’s successor, and Johns Manville, which built an asbestos plant just outside the city limits in the early 1920s. The jobs were dirty, poorly paid, and dangerous – particularly in the asbestos factory – but they were considerably better than what had been available in Arkansas and Georgia, where a majority of the 1930 residents were born. Gideon Missionary Baptist Church, founded in 1922, anchored the neighborhood.

The heyday of Frog Island extended from its founding into the late 1940s and early 1950s. It produced much of the city’s African-American leadership during that period as well as several African-American fraternal organizations. Proud men and women, including many professionals, came from its streets. Its residents led the Whittier School desegregation battle.

Residents of Frog Island have proudly remembered their past with two reunions. In 1974 and 2003, the remaining original residents and their descendants gathered to celebrate the neighborhood, in Ted Anderson’s words, “where we grew up and loved so much. We were like one big family, and the love and closeness has lingered all these years.” 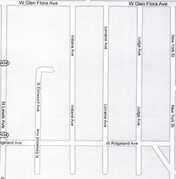