This school was set up at at 67-69 Lorong 14 Geylang. Past Principal includes Mr. Lim Hong Teck. The school was set up by Maddam He Yan Na and Xui Qian Hong. H was one of the "big sisters" in the Happy World Cabaret and chairperson of the Happy World Dance Troupe which later became known as the Happy Opera Society. In 1946, they were deepy troubled by the large number of children roaming the streets of Geylang and she gathered her dancers to set up Happy School for these kids. Xu was the accounts head. Madam He and the board members (some of whom were her dancers in the troupe) insisted that no school fees be collcted and that all books and stationery were to be given free. The first enrolment attracted about 90 students with reknowned calligrapher Wong Guo Liang as the first Principal. He advised the Principal to never visit the Happy World Cabaret and to be a good role model, impressing on him the importance of education.

Xu was a great Caontonese beauty who became a cabaret girl at 16. OUt of an average of $1000, $500 went to the school to hiring their evening jobs. School fees were finally imposed at $2.50 in 1950 due to rising operating costs. The school operated from 1946 to 1979. It moved once in 1947 from Unit 24 on Lor 14 to Units 67 and 69 on the same lane after it received help from George Lee, owner of Happy World Amusement Park. Lessons were conducted out of two rented classrooms at Mountbatten CC when its numbers rose to 600 stuents. Unfortunately, by the 1960s and 1970s, Chinese medium schools faced smaller numbers and shut down in 1979. 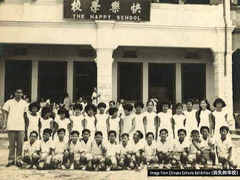