Holy Innocents' High School traces it's roots to the Chinese Mission that started it's missionary work in Singapore in 1832.

Classes were discontinued but by 1920, with Fr. Becheras as supervisor, the classes grew in size and the school was changed renamed Holy Innocents’ Boys School.

In 1957, the school relocated to its current site which originally comprised of a two-storey building with 12 classrooms. 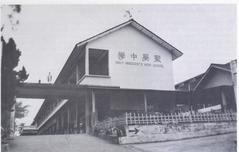