Hutcheson's Hospital,
158 Ingram Street
This fine building was built in 1805 by architect David Hamilton. It replaced the original Hutcheson's Hospital
in Trongate, which was demolished. The hospital was founded by the Hutcheson Brothers, George and Thomas, who wanted to offer support to old men and boys without hope. The two brothers are commemorated by these statues, sculpted by James Colquhoun in 1649 and removed from the original building.

The new Hutcheson Hall has a dramatic spire and Corinthian columns which make it a popular building for visitors. It is currently the home of the National Trust For Scotland, but the earlier history of the building and the Hutcheson Brothers is remembered in an inscription above the columns. The Hall "closes" Hutcheson Street, which means you get great views of the Hall as you walk north up the street.
David Hamilton worked on many buildings in the Merchant City. See also Lanarkshire House, GOMA, and Royal Exchange Square. There is also a small portrait sculpture of Hamilton by Sandy Stoddart at 178-180 Ingram Street 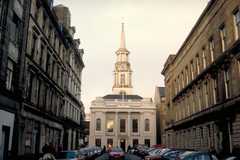