This was the site of the McCormick Reaper Works (1873), and the International Harvester Plant (1902-1969). It is now home to an industrial and office park, developed by the Pyramidwest Development Corporation. The McCormick plant was at the center of the struggle for the eight-hour day that led to the Haymarket Massacre on May 4, 1886. In addition, in 1952, the recently merged Farm Equipment Workers and United Electrical Workers unions shut down the plant when International Harvester began to close the McCormick Works Twine Mill. The 1952 strike grew into a crucial battle in International Harvester's effort to oust the more radical FE-UE Union, and replace it with the more moderate United Auto Workers Union. The accompanying photographs show striking workers at the McCormick Works in 1952, and the factory as it looked in 1908. 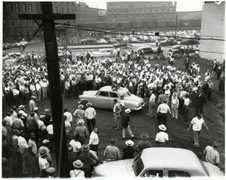 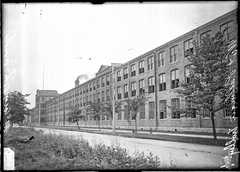