Statues Of "Italia" and "Mercury", By Alexander Stoddart, Italian Centre, Ingram Street.
Alexander Stoddart (born 1959) is a sculptor from Paisley who specialises in making Neo-Classical style statues representing the human form. The term Neo-Classical relates to a movement in 18th Century art and design which was influenced by ancient Greek and Roman art. These civilizations produced the greatest philosophers, playwrights, artists and engineers, as well as pioneering types of politics and language. In 18th Century Europe, many artists chose Classical forms to represent the new feeling for democracy and a belief in high ideals such as beauty and perfection. Greek and Roman sculptors in particular were thought to make perfect models of the human form. Another important theme was the depiction of deities or gods, representing beauty, love, war and so on. Stoddart has used these same forms and mythical ideas in his work. In the context of Glasgow, with its richly ornamented buildings, Stoddart’s statues may look at first as if they come from centuries ago.

Stoddart has chosen to depict in his work figures who relate to ancient principles, and who are depicted in typical Greek-Roman style. Symbolic features such as head-dresses, staffs and draped robes are revived, and the figure of Mars is naked to display an ideal of bodily perfection. Italia holds a cornucopia, or horn of plenty, in her left hand, representing abundance and prosperity. In her right hand is the Flowering Staff, a symbol of nature. The curious castle-shape on her head represents The State and is called a Mural Corona. The figures also adopt a very dignified and serene pose, suggesting noble qualities. It is often suggested that this type of architecture and ornamentation is perfect for Glasgow as it blends in well with the existing structure of the city. 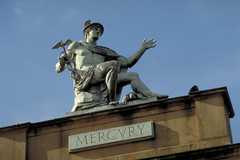