An example of one of Chicago's many shops that were part of the American Arts and Crafts Movement. Silversmith Clara Barck Welles opened Kalo in September 1900. Originally in Park Ride, Welles moved the shop to the Loop in 1914; closed in 1970. The image shows Mrs. George Welles, Miss L. Engle, and Mrs. George Soden, suffragettes on July 30, 1914. They are at the Kalo Shop, where they melted down silver objects that had been contributed in the Self Denial drive to raise money for suffrage. 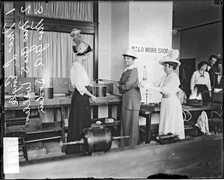