A donation of shoes are collected and displayed in memory of murdered and missing women and girls. On December 6th 1989 fourteen women were murdered in the Montreal Massacre. December 6th became Canada's National Day of Remembrance and Action on Violence Against Women with hopes of raising awareness to end the violence against women. Do your part and help end it!
http://www.facebook.com/group.php?gid=112729017558 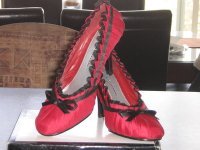