Kong Yiong High School was started as a school offering Chinese education on 25 February 1918. Office. It was moved several times until it finally settled at 993B Kovan Road in 1930 where it remained until November 1992.

In 1988, the primary school adopted the "hanyu pinyin" variant and called itself Guangyang Primary School and relocated to its new premise in Ang Mo Kio. The secondary school moved to Bishan.

In 1986, due to a sharp drop in school enrolment, Kiong Yong High School closed.

In 1987, the School Advisory Committee of Kiong Yong High School left a sum of about $60,000 which was to be given to a school that adopted its name. When a new school was set up in Bishan, it was decided that the old dialect name "Kong Yong" be used. Hence, the new school came to be known as "Guangyang" which is the hanyu pinyin equivalent of "Kong Yong". Thus, Guangyang, hanyu pinyin equivalent of "Kiong Yong" a government English medium school, was set up. In its early months, Guangyang Secondary shared the premises of Zhonghua Secondary School. 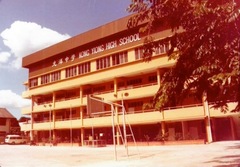 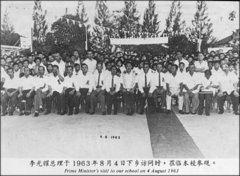