Lake Meadows is a twelve-building housing development built on "slum clearance" land near South Parkway (now King Drive) between 31st and 35th Streets. The Illinois Institute of Technology and Michael Reese Hospital organized the South Side Planning Board, which planned the community and secured funding from New York Life Insurance Company. The ground breaking was held in 1952, and the units were built between 1953 and 1968. Initially, Lake Meadows stood as an example of an interracial, middle-class community, although eventually it became a largely black community. The accompanying photograph from 1950 shows an alley in the neighborhood not long before it was cleared for the Lake Meadows apartments. (Chicago History Museum, ICHi - 00825) Lake Meadows is a remarkable example of private urban renewal. But it is just one example of clearance projects that displaced mixed-income black communities in post-World War II Chicago, and increased competition in already overcrowded housing markets in community areas on the South and West Sides. 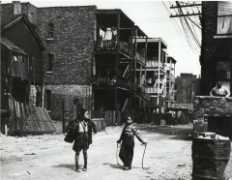