Lucy Craft Laney
Miss Lucy Craft Laney has gone down in history as one of the state of Georgia's most influential educational leaders. As a child of Georgia she is in league with other outstanding black hero's from Georgia such as Dr. Martin Luther King, Jr. Civil Rights Leader and Dr. Henry McNeil Turner, the first black chaplain in the U.S. Army and the first black in the Georgia Legislature. Miss Laney's contributions in the area of education are a tribute to perseverance, dedication and unwavering faith.

Haines Normal and Industrial Institute
Established by influential educator Lucy Craft Laney, the Haines Normal and Industrial Institute was chartered in 1886 and grew to include a Kindergarten to Junior College curriculum, the Lamar School of Nursing, and a teacher training program. Named for a benefactor Francine Haines, the Institute also served the African-American community as cultural center before its replacement in 1949 with the present Laney High School. The Cauley-Wheeler Building (1924), located in the center of campus, housed the primary school and was named for philanthropist Alice Wheeler of New York and her nurse Mary Cauley, a Lamar graduate. It is the last remaining building from the original Haines Campus.

John McClinton Tutt, 1886-1986
For over six decades, John Tutt educated Augusta´s youth at the Haines Normal and Industrial Institute and Lucy Craft Laney High School. After graduating from Lincoln University in 1905, Tutt returned to Augusta to teach Mathematics. Coach Tutt´s teams amassed hundreds of wins in football, basketball, baseball, and track and field-many against college and semi-professional teams. He was a founding member of the Southern Coaches and Officials Association (est. 1922) and was instrumental in organizing its members into a cohesive group of African-American officials prepared to officiate within the Southern Intercollegiate Athletic Conference and elsewhere. John Tutt lived at this location from 1928-1968. 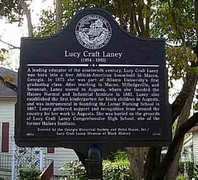 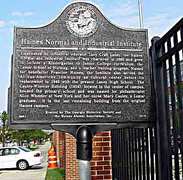 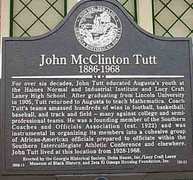