Marianne's Park was dedicated in 1993 in memory of Marianne Goulden. The local Crisis group holds Take Back the Night marches and December 6th vigils there every year to protest the on-going atrocities against women.

"Marianne Goulden was a woman who gave her all and had tremendous strength to overcome hard times. Her generosity touched and lifted everyone who had the privilege of sharing in her life." 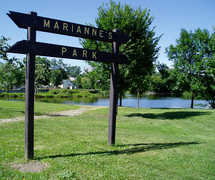