Site of the Memorial Day Massacre in 1937 when workers at Republic Steel joined 85,000 workers at other steel plants in a mass strike organized by the CIO’s Steel Workers Organizing Committee (SWOC). To stop the picketing, approximately 200 Chicago police officers set up a barrier across 117th Street. In a matter of minutes the police fired over 200 shots, four marchers were fatally shot, six other were mortally wounded, and thirty others suffered gunshot wounds. The gunshot wounds of the dead were all back or side wounds. The accompanying photograph shows the melee in progress with police officers and others wielding clubs against demonstrators. Leon Despres Describes the Republic Steel Massacre 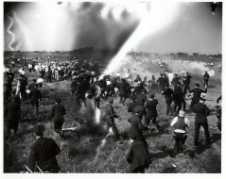