Memorial March for the Missing and Murdered Women of Edmonton

"On February 14th join with men and women from across Canada to raise awareness of the many mothers, sisters, and daughters who have been murdered or who are missing."

"In Edmonton, June 2004, Rachel Quinney was found dead and mutilated. A year later, Ellie May Meyer was found in the same way, murdered and left in a field not far from where Rachel and numerous others had been found. Join the march to bring attention to the plight of these and other women." 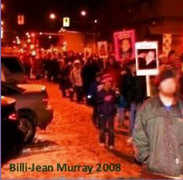