Constructed in 1929, with funding from Julius Rosenwald, a major Chicago philanthropist and co-owner of Sears Roebuck and Co. Despite the Depression of the 1930s, the Garden Apartments became one of the cornerstones of the thriving 47th Street commercial and residential district. In the buildings 421 units, Chicago's black middle class -- including sociologist Horace Cayton, musician Quincy Jones, and boxer Joe Louis, among others -- found good housing within the "Black Belt." Residents had access to a playground and courtyard, as well as storefront retail space that housed a Sears, Walgreen's, A & P Grocery, and a Pullman Porters credit union.
For more information, see: http://www.nationaltrust.org/11most/2003/michiganblvd.html 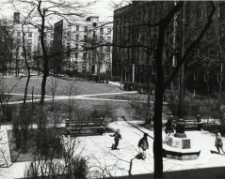