The Olive Map of www.iloveoliveoilblog.com

My grandfather and grandmother -- or Pappou and Yiayia, as they're called in Greek -- have had olives groves in a tiny village called Platanos for decades. My grandfather -- one of 7 brothers and sisters -- inherited a portion of his father's large landholdings. On a good year, he'll produce a few tons of oil, several gallons of which he'll ship to family in the U.S. 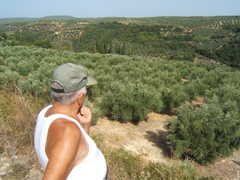