North Lawndale's tumultuous history parallels Chicago's sweeping story of immigration, economic booms and deindustrialization, racial transition and conflict, and persistent community and political activism. The virtually empty prairie of the mid-19th century developed into a vibrant Jewish neighborhood and industrial center by the 1920s, became an almost entirely African American community in the post-World War II decades, and, between the 1940s and 1990s, lost two-thirds of its population and the majority of its industry. Vestiges of all of these changes remain in the monumental buildings along Douglas Boulevard and the extensive stock of Greystone housing. African-American residents have endured through segregation and economic decline, building community networks and fighting to bring housing, jobs, private investment, and public services to the area. Although residents continue to struggle with the problems of a largely poor urban community, activists and developers have had some success, making North Lawndale a nationally renowned example of "inner city" revitalization. 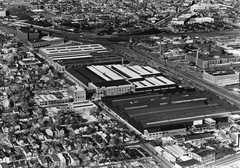 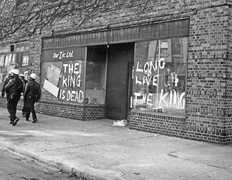