"Chris tells me that, allegedly, the spring had been a favorite swimming hole for neighborhood children, but after a child drowned there the city capped off the spring and filled in the hole. At some point later, a house was built on this spot and the owners only learned of the former spring when their foundation started to settle and the water began percolating up from beneath their house. The current owner of this property is almost universally reviled by everyone I have spoken to in this area, and he now seems to be engaged in some sort of squatter’s rights claim to Epps Park itself, as the fence around his house gradually expands to include more and more of the riverfront land."
excerpted from The House Where Nobody Lives 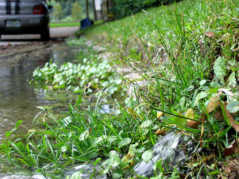