The First Congregational Society had Bailey Welch build the church in 1828. It was dedicated in January, 1829. Mr. Welch fell from the steeple to the ground, but lived many years after. For this the town voted him $100 at its annual meeting in 1829. The church was paid for from the sale of the pews.

The incorporators reserved one section of pews in the gallery for black townspeople, for there were two black people in the town at the time. Nancy was a freed servant whom Mrs. George Kimball brought from Bremuda, and Dennison Wentworth, a black boy, lived with Mrs. Plastridge at the old “Dole Tavern.” Mr. Kimball chose to have Nancy join with the family in their pew. Dennison had become friends with other Canaan boys and had been considered about as good as any of them. He also declined to use the pew, and the pew never came into the use planned for it.

Originally plain, it was embellished about 1853. The church membership declined after 1860 and keeping a pastor became a problem. However the church retains its active status, having a service each summer. 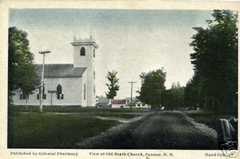