The Paramount was built in 1962 by a carpenter-turned-property developer. It was shut down in 1983 and converted into Fitzpatrick’s supermarket in 1984 before the chain was bought over by Cold Storage. And when Cold Storage closed the outlet in 1985.

The Paramount was later the Serangoon Garden Village complex with F&B outlets in the late 1990s. 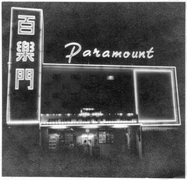