PLMGS started out on 31 October 1916 when the Boundary Road land was purchased to build a school.
It was a branch of ACS and was known as Paya Lebar English School.

Enrolment began with the first classes beginning at elementary level in 1917, 3 staff memebers and a pupil enrolment of 24 boys. Girls were enrolled the following year.

In 1986, PLMGS was relocated to Lorong Ah Soo and the building torn down to be replaced with a kindergarten and play center that is part of the Paya Lebar Methodist Church. 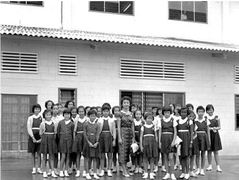