The Penny Savings Loan and Investment Company was incorporated September 10, 1910 by several prominent African American businessmen in Augusta. The building that currently occupies the corner of James Brown Boulevard (formerly Campbell Street or 9th Street) and Laney-Walker Boulevard (then known as Gwinnett Street) was constructed in 1925 based on designs by architect G. Lloyd Preacher. The company operated for 18 years in this pivotal location in the neighborhood until 1928 when the business closed its doors due to the downward financial trend and subsequent depression. The Penny Savings Bank Building anchored the southern end of the block, with the now razed Lenox Theater at the southern end. With other thriving businesses, these contributed to the area known as the “Golden Blocks” of Augusta’s African American business district. This three-story masonry building was partially rehabilitated in 1990 using Community Block Development Grants and other private funding as part of the “Armstrong Galleria.” But the development has languished since that time, and Penny Savings has been vacant for a number of years. After it was purchased by Augusta-Richmond County through the Augusta Land Bank Authority in 2011, the city issued a “Request for Proposals” in 2012 for the development of two key buildings within the Bethlehem and Laney Walker neighborhoods, the Penny Savings Bank Building and the St. Benedict’s Boarding School on Twelfth Street. With no proposals accepted, the future of the historic Penny Savings Bank Building is uncertain. Its visibility and well-documented significance within the neighborhood will hopefully aid in a successful preservation solution and redevelopment of the historic resource. 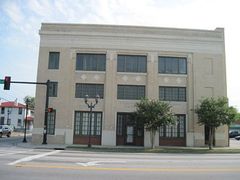