Quedlinburg Castle was founded in the present Saxony-Anhalt in 936 by Otto I, Holy Roman Emperor, at the request of his mother Queen Matilda, later canonised as Saint Matilda, in honour of her late husband, Otto's father, King Henry the Fowler, and as his memorial. Henry was buried here, as was Matilda herself. 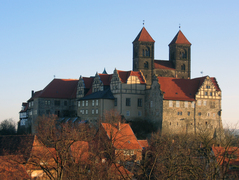