"On January 4, 2004, Rachel Davis died protecting a stranger from being beaten outside a Vancouver nightclub. She was 23. The circumstances of her death have inspired many people across Canada, just as her life inspired her family and many friends. She died the way she lived: helping others.

"To remember Rachel and honour the spirit of youth, her family has created the Rachel Davis Award. Each year, the award will go to a young person who through an outstanding act of integrity, kindness or compassion, has affected the lives of others in a meaningful way.

"In the early hours of January 4, Rachel and some friends were leaving a Vancouver nightclub when a fight broke out. A young man was thrown to the ground as several others attacked him; Rachel intervened - and put herself between the combatants, appealing for calm. In the ensuing moments shots were fired, leaving Rachel and another young man dead, and four others wounded." 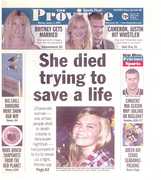