In a restructuring of technical education in 1887, Anderson's College, the Young Chair of Technical Chemistry, the College of Science and Arts, Atkinson's and Allan Glen's Institutions merged to form the Glasgow and West of Scotland Technical College, or 'The Tech' as it was affectionately known. Anderson's College Medical School became a separate institution at this time. The College initially occupied the existing buildings of its constituent institutions but the expansion in student numbers, and the desirability of centralising on one site, required a new building. The building was designed by David Barclay and completed in several phases. The foundation stone of the Royal College Building, adjoining the Anderson's College site, was laid by His Majesty King Edward VII on 14 May 1903. In line with John Anderson's vision of his Institution as a place of useful learning, the College offered a wide range of day and evening courses to support the needs of industry in the West of Scotland. 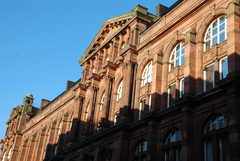 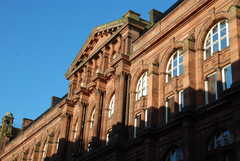