Prince George, B.C. - Approximately 80 people gathered at the junction of Highways 97 and 16 this afternoon for a traditional ceremony marking the completion of the 'Sacred Sisters Unity Ride 2010'...

Organizer Eric Mitchell says a core group of 25 people set out from the Upper Nicola Band's traditional territory at Douglas Lake, near Merritt, back on July 3rd.

He says the unity ride was the brainchild of Upper Nicola Elder Wilfred Thom who wanted to do something to show support for the family members of the many missing and murdered women along the Highway of Tears... 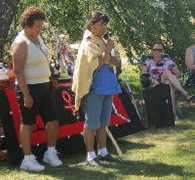