Set up in 1928, Serangoon Secondary School was first called Serangoon English School. It was then the only government co-educational school in the Singapore and a feeder school to Raffles Institution.

After the war, the school moved to Aroozoo Ave. and remained a boys' school for almost 12 years with Pre-University classes offered for both sexes in 1965.

The school relocated to Lowland Road in 1967 and also changed its name to Serangoon Secondary School. Pre-U classes were shut down in 1976.

In 2001, the school was relocated to it's current site at the reclaimed land at the end of Upp. Serangoon Road. 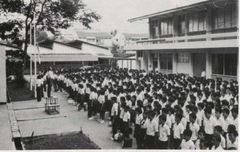